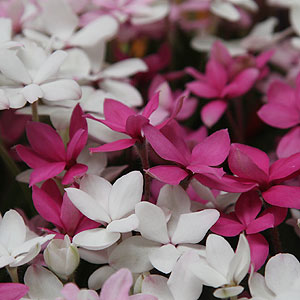 Rhodohypoxis species such as Rhodohypoxis baurii, (see picture right), milloides and schaal are a clump forming rhizomatus plant that grow well in the rock garden as well as in pots and containers.

Originally from South Africa these tiny treasures require a well drained soil especially in winter when they are dormant. In the UK they are widely grown in containers to allow protection from winter rains which will tend to cause the rhizomes to rot.

We suggest growing in a shallow container, top the mix with a fine to medium grit, this seems to stop the birds from digging around and also lifts the foliage above the soil and seems to prevent a problems. In winter these tiny treasures need dry conditions, so in the UK cover them up or move the containers to a protected position. 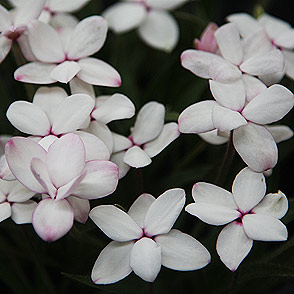 For a splash of color in the garden look for Rhodohypoxis 'Stella' is a popular pink flowering variety, again a strong growing type.

With a few hybridisers working away at producing new forms you can also find Double flowering cultivars are available formsale with 'Hope', and 'Kiwi Joy' with its double pink flowers being two of the best.

Although plants are readily available for sale from nurseries, they can easily be propagated by division, or if you are little more adventurous, grown from seed.

Our favourite is Rhodohypoxis baurii a low growing species that forms a mat of flowers ranging in color from white to deep pink, flowers appearing over 2-3 months from spring to summer. And a few named cultivars are around including, r.baurii 'lily jean', r.baurii 'rosie lee' and r. baurii 'red star'.

An excellent choice for the UK, where you can ensure good drainage and sunshine, and some protection from the rigours of winter. In the right position they will flower for nearly 3 months, and when mass planted they really do look magnificent.

You will need a shallow container and a free draining potting mix, if they get waterlogged, rhodohypoxis buls will simply rot. Keep them dry in winter.