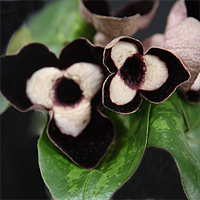 Asarum plants such as Asarum maximum, Asarum europaeum (wild ginger) and A. splendens are a clump forming woodland plant often neglected but with fantastic foliage asarum are well worth a place in the garden.

Asurum are used as a ground cover plants and are native to Europe, China, Japan and the USA and are also called 'wild ginger'.

Some of the best foliage plants in this genus are from Japanese collections where they are called 'asaramu'. Growing asarum is not difficult given conditions similar to other woodland plants. Asarum europaeum and asarum canadense are both popular species. 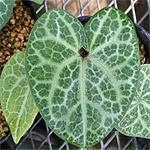 Asarum in the garden

Asarum are a woodland plant grown mainly for the foliage, however some of the flowers are also unique and are prized with collectors. Species are native to Japan, China, USA and Europe. Asarum are known as 'wild ginger', but are not edible.

Asarum require a humus rich well drained soil, many growers and collectors us a humus rich gravely mixture in the pots.

Asarum require a shaded position, similar to Trillium and Clivia. Some species will cope with a little morning sun.

Asarum Plants are available for sale from the following nurseries