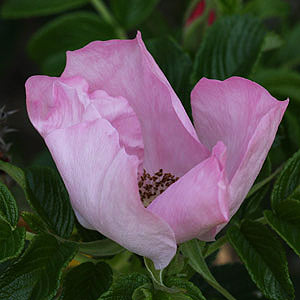 We know they are thorny, however Rugosa Roes are indeed a wonderful hardy rose. Pruning them is not tricky, just decide how you want to use them before you start pruning. You say, what do you mean, by how I want to use them?
Rugosa roses are used both as a hedging plant and as a shrub in the garden.

As a hedging plant you tend not to prune them much at all, remove any dead wood, tidy up any errant growth and get rid of an old cane or two every few years, easy as that.

And as for well known varieties Frau Dagmar Hastrup (pictured right) is a popular type.

Things do get a little different when you grow these as a garden shrub. In this case Rugosa roses are treated very differently, they are pruned very hard indeed.

One theory is that old shoots are removed every two years, right back to the base. New growth is pruned back by 50% or more.

Well that's one theory, the other is to prune back everything to around 15cm from the base, still remove some old canes each year.

Remember that Rugosa roses are fairly vigorous, they tend to get leggy, this is OK if you want a hedge, if you want a shrub, then get busy.

If you Rugosa rose have been neglected, or 'left un pruned for a few years' the treatment is different. Prune back 1/3 of the growth each year for 3 years to give it a chance to push out some new growth from the base. The new growth will still need to be cut back each year as well.

Best time to prune : Late winter after the foists are gone. This is also a good time to transplant Rugosas, the soil is warming up and they have just been prunes (smaller and easier to shift). Water in well with some liquid seaweed fertilizer, and stand back.

Rugosa Roses as a Hedge

The reason why Rugosa roses make such great hedges is simple, they grow on their own rootstock. This means they will sucker and eventually form a dense clump.

As the suckers appear simply leave the good strong ones and prune back the weaker ones, you can do this in summer if you wish.

And when it comes to the winter prune, its simple, use some long handled loppers and get your hedge into shape quickly. Remember that Rugosa roses flower on new growth, so no problem with flowering the next season.

We also know a gardener who prunes his Rugusa hedge back every year with a chain saw, to around 40cm, it seems a little brutal, however for him its quick and it works. And of course some varieties are a little more vigorous than others, so ask before you buy. 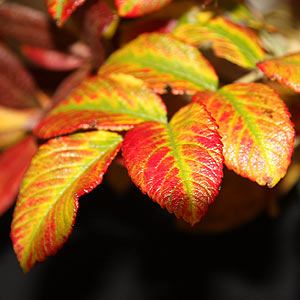 Rugosa roses also have some great autumn foliage, some turning green to yellow, others with brilliant reds along the way.

The intensity of the color will depend on the temperature during autumn as well as on how cloudy the autumn is.

If you are looking for Rose Hips then the Rugusa rose varieties are the one to plant, brilliant large red fruits that contain seeds, but is generally the large hips and the colour they bring that gardeners value so much. And if you live near the coast, then Rugosa roses are also for you.