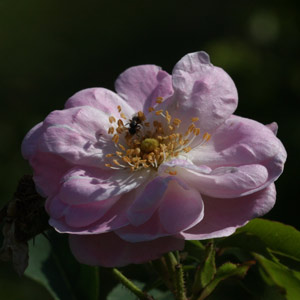 Widely grown in France, the Apothecary's rose or Rosa gallica 'Officinalis' is is a very fragrant rose, the petals which retain perfume long after they are dried were a favorite often collected for potpourri.

The fascination begins with the thought that this may well be the frost cultivated rose.

Originating in Persia, it has been used for medicinal purposes in monasteries, hence the name. ¬?

Interesting also in that this rose in almost 'thorn less' perhaps one of the gene pool that gives us our thorn less roses today. The rose hips are prominent in winter and it was for these that the monks mainly grew the rose.

A tough, disease resistant drought tolerant rose, also happens to be famous as the 'Red Rose of Lancaster', War of the Roses, the Apothecary's rose has a history.