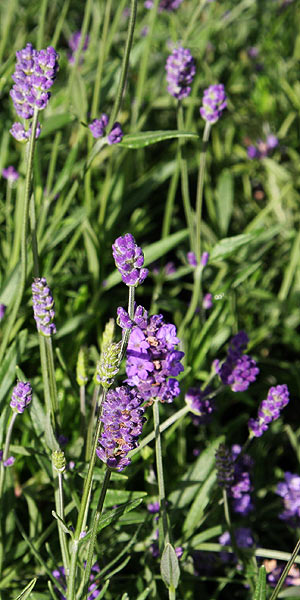 Basic guide to pruning lavender and general lavender care. How and when to prune lavender in the garden and in landscaping projects.

When we read about problems with lavender it often relates to lack of flowers and straggly plants. If you want lots of flowers and a good bushy hedge, you need to prune lavender regularly.

Although Lavenders come in different varieties, pruning them is very similar. The two main types of pruning are the general annual shaping and bringing back to size, and the the more difficult pruning of old or woody plants.

What we commonly call 'English Lavender' is actually a Mediterranean plant (Lavandula angustifoia) and is often used as a hedging plant. Like all Lavenders it is a tough plant that likes a sunny well drained position.

The hardier the Lavender is, the more pruning it can take, this is a general rule.

You can generally see the new shoots on soft wood, or at least the signs of them as dormant shoots lower on the woody stems and if you cut above these you will have masses of new growth and flowers the next season.

If you prune below these dormant shoots it is likely you will actually kill the plant. With old plants that seem a little 'beyond it'. Prune back to 10cm above the bare wood and hope.

When to Prune Lavender

This will depend on what sort of pruning.

Hard pruning, where you are removing a lot of the plant is best left until new growth appears in spring.

Pruning to shape can be carried out a number of times. In spring and again in summer after the flowers have faded.

How much do I prune each time

Remember that lavender flowers on new growth, so gentle pruning does not harm flowering, in fact it can promote a second flush.

When you prune back to these shoots it forces the plant into new growth, and as spring is the time for new growth its not a bad time to do some remedial pruning.

Pruning involves cutting back regularly by around 2/3 in summer after flowering. New growth will appear from just above the old wood, unless you cut back to far, so look for the signs of new shoots. You can also give the plant a 'chop' in early spring to hold back flowering. 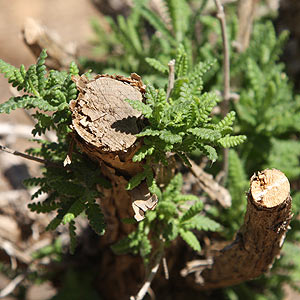 Lavandula x intermedia is the same, you must never cut back into the old wood as they will generally fail to re shoot. These plants are best pruned lightly in autumn, maybe again in spring to early summer.

The French and Spanish Lavenders are also best pruned lightly after flowering, again they do not take to being cut back into old wood.

So in general, prune back so that the plant still has foliage on each stem. Older plants can be pruned back once and then the next year they may well have signs of new growth lower down, so prune in stages over 2 - 3 years.

It is often said that you simply can't hard prune lavender. The truth is you can, however results will be vaiaalble. Lavender will sometimes reshoot from hardwood, and sometimes not. Pictured right we have a plant hard pruned back into old wood, one stem has new growth the other does not. The other problem is that the stems tend to split and rot back, so its not really a long term solution.

However, hard pruned lavender will also put out basal shoots, so you can prune back hard to almost ground level, and with a little luck the plant will reshoot from the base.

Hard pruned plants will look a little unsightly, and more than likely never regain the structure that you would hope for. The main problem is plants rotting back down the stems into the base. Pictured right we have a plant that has been pruned, showing new basal growth. 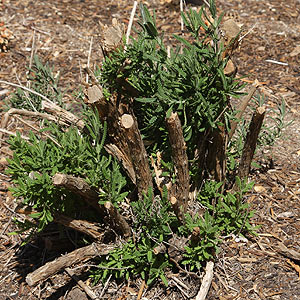 It will often be more effective to remove woody neglected plants and replace them with new ones. You can take cuttings in spring and 'grow your own' replacements.

After 12 - 15 years most lavender plants are better replaced than pruned.

Generally once a year a small application general purpose high nitrogen fertilizer. Apply fertilizer at the end of winter and allow the rains to soak it into the ground.