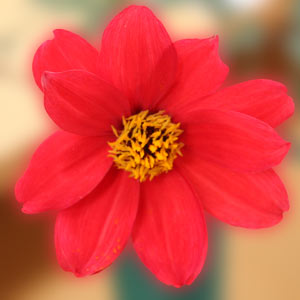 Ideas for planting summer flowering bulbs including old favourites such as Gladioli Bulbs, Agapanthus and Dahlia Bulbs including the classic summer bulb, Dahlia 'Bishop of Llandaff' (picture right)provide a welcome addition of flowers to the garden after other bulbs have finished flowering.

However it is well worth investigating the many bulbs from South Africa if you wish to add real color to the summer border. Many of the South African bulbs do extremely well in pots.

Garden bulbs that will flower through the summer months are a great addition to the garden, some are common including some of the ornamental alliums, arum lilies, begonias, crocosmia, dahlias, galtonia, gladioli, gloriosa lily, hippeastrum, lilies and zantedeschias.

Some other great summer bulbs are a little more unusual, and these include many of the rarer South African Bulbs that although are difficult in the UK climate can be successfully grown and brought to flower in summer months with a little care and the help of a greenhouse or hothouse 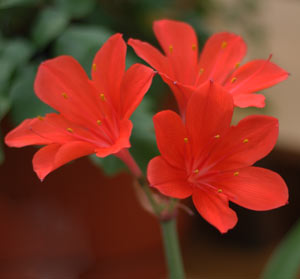 Watsonia, now these are a fairly hardy bulb and can tend to 'multiply' a little to readily, so keep an eye on them, but for a great display in early summer they are an excellent bulb.

Cytranthus do well coming into flower in early summer, overwinter in the greenhouse and do not water during this period. C. obliquus C. huttonii are two species worth looking for. Cytranthus elgens (picture right) is one of these easier to grow, especially in a container.

And of course we talk about gardening with summer bulbs we also have Arisaema candidisimum, now many arisaema species flower much earlier, late winter to spring, but this one is late, early summer, followed by magnificent foliage that last right through to autumn.

Usually planted in Autumn these warm season bulbs many may require some protection from cold winters. Bulbs can be kept indoors or in a conservatory over winter and remember that many do not really like a of water during winter.

They are mostly sun lovers, begonias are an exception. In general plant bulbs in groups or clumps for best effect. Consider growing bulbs in containers or in the border. Some bulbs like to be lifted in winter others like to left alone, however to much water can be a problem with many of the South African bulbs

List of the best summer flowering bulbs for the UK garden

Other great summer flowering bulbs include:

People who liked this also liked