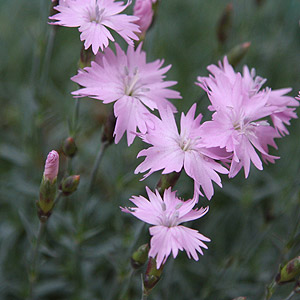 A varied group of plants, in general Dianthus are easy care, and widely grown, best known for types such as 'Sweet Williams', Carnations 'Pinks', 'Clove Pinks' and 'Cheddar Pinks'.

The 'cheddar pinks' are very fragrant and are named such as they are originally from the Cheddar Gorge in Somerset, almost extinct in the wild due to over picking and habitat destruction from Victorian times until today. Pictured right we have Dianthus gratianopolitanus or 'Cheddar Pink'

And as for the common name of 'Pinks', it is to do with the edges of the flowers themselves, they look as though they have been cut with a pair of 'pinking shears'.

Dianthus are popular for the sweetly fragrant flowers as well as the foliage. The longer stemmed varieties are also a wonderful cut flower and the others are great for vases and posies.

So what is the difference between them. Carnations are bred for the cut flower industry, they tend to be a little more fussy than most. The 'Cheddar pinks' are the really hardy types, excellent in the cottage garden, rock garden or in a container. And the 'Sweet Williams' or 'Pinks' are usually treated as a biennial, unless you live in a warmer climate.

Specialist Dianthus nurseries can supply by mail order Dianthus or "Garden Pinks", these are a perennial plant used widely in garden borders.

Dianthus caryophyllus hybrids are the Sim Carnations. The Pinks, or Sweet Williams are Dianthus barbatus, this is a large genus with well over 300 different species, of dianthus the variety available is huge.

Plant in spring or autumn in a sunny position. 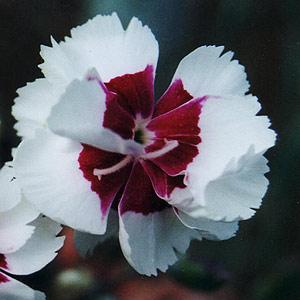