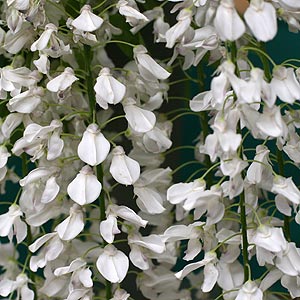 Wisteria are often seen as climbing plants, their roots down in the cool humus rich forest floor and the plant reaching up into the light, flowers all at the top in the sun. This gives us the key to growing wisteria. A cool root run and a sunny aspect for flowering upper parts of the plant.

The common image of wisteria is of those fragrant purple to lilac flowers that we all love. However we also have white flowering plants such as Wisteria floribunda alba, pictured right.

And the Wisteria floribunda 'Macrobotrys' with its long racemes of deep puple flowers, another brilliant plant

With so many wisteria varieties and cultivars available choosing the best one will depend a little on flower colour, scent and growing habit.

The three main species grown are, Wisteria brachybotrys, Wisteria floribunda, and
Wisteria sinensis. Each has its benefits, and some have their drawbacks as well.

In general it is the flower form at distinguishes the species. Wisteria brachybotrys has shorter racemes to around 20cm, however they are large (broad). The flowers are generally heavily and sweetly scented.

Wisteria floribunda has long racemes to around 40 cm and up to 50cm, they are prolific flowerers and some are sweetly scented. However some varieties only have a faint scent. The flowers open as the foliage appears, and each raceme opens sequentially from top to bottom.

Wisteria sinensis is generally popular because the flowers appear before the foliage opens. Each cluster (raceme) has up to 150 individual flowers, and they all open at once with this very vigorous species.

Wisteria brachybotrys is also known as the 'Silky wisteria'. Generally it will reach around 3 - 5m in height. These flower a little earlier than the other varieties. Heavily scented with shorter but broad racemes.

And what about the Japanese Wisteria, how do we make sense of the names we see in some specialist wisteria nurseries? In Japan Wisteria is called Fuji. Wisteria Floribunda is called 'Noda Fuji'

So something labelled Wisteria 'Murasaki Naga Fuji' is really Wisteria floribunda 'Macrobotrys' purple flowering variety, and it could also be named 'Naga Noda'

So the c hoice of which is the best variety comes down to flower colour, flower form and scent. A specilaist nursery should be able to provide the right plant.

As for pruning, they are easy, welook at how to prune climbing and standard wisterias.