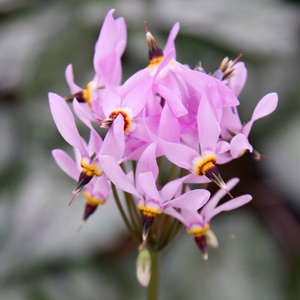 Dodecatheon are small flowering bulbs, known as 'shooting stars', and are native to the prairies and woodlands of the eastern states of the USA, from Texas through to Georgia, Ohio and Pennsylvania.

Closely related to primulas they grow well in full sun to part shade and flower from late spring to early summer. Generally suited to Zones 3-9 (USDA)

Dodecatheon are a wonderful addition to the garden border in a sunny well drained position. Many gardeners prefer to keep them in pots or troughs where they can easily control drainage.

Plants are available for sale from a few specialist growers in the UK, but look for them at plant fairs and shows for some interesting cultivars.

It is the flower with its characteristic five recurved petals that give it the name 'shooting star'. Color range is from a very pale almost white pink to a deep magenta, with hybrids providing extra interest.

Shooting star flowers reach around 30cm and are held well above the basal rosette of foliage, when planted in groups make a spectacular display

In the natural environment Dodecatheon plants grow in humus rich moist but well drained soils and we need to replicate this if we are to grow them successfully in cultivation. Good drainage is essential in wet winter months.

Plants can be propagated by division or from seed. Divide after flowering and replant with some protection from the hot sun. Mature plants can be divided just after seed has set. Water well after dividing and mulch to provide a cool root run.

Propagation from seed can be problematical. Dodecatheon mead are used to cold winters, they flower and seed and the seed is naturally 'stratified' by cold winters and snow. So seed collected is best given a 3-4 week 'winter' under refrigeration at around 40 degrees F (5 C). Seed can then be planted out into seed trays in spring. Be patient when growing from seed as Dodecatheon mead or 'Shooting Stars' may take 5-6 years to flower from seed.

The flowering season is short, but planted with hostas, amongst epimediums or with brunnera, Dodecatheon mead or 'shooting stars' will add a touch of excitement in spring.

Dodecatheon plants are available for sale from the following nurseries.