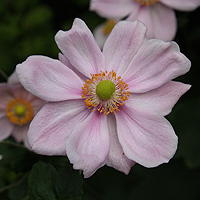 Anemone hupehensis var. japonica is the windflower, tall stately flowers on long stems rising about green foliage. Flowering in late summer to autumn these are a hardy perennial with flowers ranging from white through to pink and deep pink.

As for growing conditions, a sunny position in a humus rich well drained but moist soil and you will have few problems. Japanese windflowers, as they are know also grow well in part shade. They will quickly form a clump and can be a little bit of a bully in the garden if left unchecked, nothing that a garden fork can't fix fairly easily.

Japanese Windflowers make an excellent plant for the border or large container. Flowering late in spring and with either white of pink flowers they provide an excellent splash of colour.

Generally available for sale during winter as bare rooted plants.