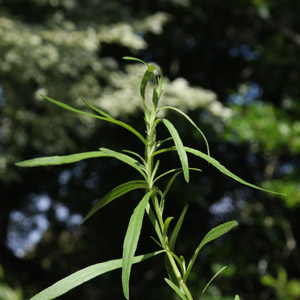 A classic herb, French Tarragon is the variety that you use all of those recipes including the well known French recipes for 'tarragon chicken' and other french classics.

The name of the plant is Artemesia dranculus and it differs greatly from a couple of 'other tarragons' that really just don't make the grade, but are often offered for sale.

French tarragon (pictured right) is a perennial herb native to the southern parts of Europe, it is peppery with a hint of liquorice unlike the Russian alternative, which has little flavour and Spanish or Mexican versions that are OK for some dishes but are just not the same in the classics. The question is why is the French version difficult to get?

French Tarragon very rarely flowers, and therefore does not often set seed, it is propagated by softwood cuttings taken in spring. You can tell it apart from the Spanish or Mexican version as the leaves are much finer.

The problem is recognising it from the Russian version, which looks similar. If you are growing it yourself, its fairly easy, if it flowers then its not the French version.

In the shops taste it, the French version tastes like tarragon, the Russian version actually has little taste.

So the French call this culinary plant Herbe au Dragon and we are looking for the fiery peppery taste, so why not grow your own?

Growing French Tarragon in the UK

The best growing conditions are a humus rich well drained soil in a sunny position. ¬?Take a softwood cutting or divide an established clump in autumn while the soil is still warm, or in early spring.

In the UK, French tarragon is often best grown in pots or containers where moisture can be controlled, especially in winter where plants may die if they get to wet while dormant.

Avoid frosts and take a few cuttings in autumn and place them in the greenhouse, just in case the main plant does not survive. We prefer to move the pots to a protected position during winter.

In good conditions plants will reach around 2-3ft (.7- 1m) and harvesting can be gradual, taking what you need as you go, or you can freeze larger quantities, or even dry the herb for use in the winter months.

As for fertiliser, we prefer a liquid seaweed fertiliser and some worm compost tea applied every two weeks during the growing season.

Herbs for Sale by Type or variety