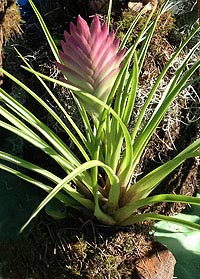 From very easy care varieties such as Tillandsia cyanea to rare species such as T. dyerianna and T.heteromorpha, Air Plants as we commonly call them are increasingly popular in the UK.

These fascinating plants can be grown both indoors and outdoors as well as in vivariums which are a great place to grow the more exotic species.

These fascinating members of the Bromeliad family include some very easy to grow plants, and for the beginner we suggest a few of the more popular species.

Commonly called Air Plants, Tillandsia do not require soil, although some species can be grown in a very free draining potting mix. Some species require warmer climates than others and these are candidates for growing in vivariums or perhaps indoors with a little extra care.

One of the increasingly popular methods of growing these fascinating plants is in ceramic dishes. This works well for some species and not others.

Most Tillandsia species grow well when mounted onto a cork board or other medium. In this situation the only real care that they require is misting to maintain a little humidity.

A few specialist air plant fertilisers are available, however a diluted liquid seaweed fertiliser two to four times a year applied in a misting spray is often adequate.

The most important care aspect for the new grower is to carefully watch the plant over the first few months. If it seems happy and the foliage does not discolor or droop you are probably doing the right thing. If the plant begins to look a little sick, chances are one of the four major care factors needs to be changed.

The key factors in successfully growing Tillandsias are Light, Moisture, Temperature and Air Flow. These care factors do differ however a few general rules should be followed.

Fertiliser is the debatable care factor. We use a liquid seaweed fertiliser every 3 months, some growers recommend using a specialist liquid fertiliser every week. We suggest monitoring the results and making your own decision here.

Tillandsia are available for sale from the following nurseries