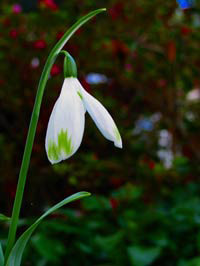 Snowdrops - Galanthus Species in the UK

When we arrived at our new garden over 15 years ago we were amazed at the number of snowdrops growing in sections of the garden. We had never really grown Galanthus before but fairly quickly they became a favourite bulb, probably because they flower in the winter when most other plants are dormant and are easy care as well. We now search specialist nurseries for interesting species and cultivars.

We soon became enamoured with these tiny bulbs and added a few other varieties to our collection, all found form sale online and purchased by mail order, nothing really exotic but in particular some beautiful low growing snowdrops that form a magical carpet in on section on the garden.

There are over 20 species and literally hundreds of cultivars, ssp or varieties and to tell the truth we are not sure which is which sometimes. And yes we do grow them in containers as well, we like to shift a flowering container of Galanthus or two close to the back door in winter, so we can marvel at the wonderful flowers of the 'winter snowdrop'.

We may well seem a little bland with our selection of just a few, including elwesii, woronowii, nivalis, plicatus and gracilis. Interestingly many of these are originally from the Northern far flung regions of Turkey.

What we do not have is Galanthus nivalis f. pleniflorus 'Flore Pleno', that a mouthful, also known as the 'common double snowdrop.

'Snowdrops' or Galanthus Species are a favourite winter flowering plant in the UK, they are a small bulb and can be grown in pots in the garden border and even be naturalised into a lawn where the flowers add a meadow look in early spring. With a number of cultivars and rare species for sale in the UK it is interesting to know that Cambo Estate holds a National Collection of Galanthus. With many species of for sale they make an essential addition to the winter garden. Galanthus can be grown from bulb divisions or from seed.

You can buy Snowdrops 'in the green' in spring or as dormant bulbs in autumn, growing from seed is a rather long process, however many rarer spe cies are commonly grown this way. Specialist nurseries offer some rare and interesting Snowdrops for sale

By shear price Galanthus 'Elizabeth Harrison' must be the rarest of all of the snowdrops, one bulb recently sold for over £700, a really lovely snowdrop with golden yellow ovaries. Galanthus nivalis 'Green Tear' runs a distant second at around half that price a close third is Galanthus plicatus 'E A Bowles' with its white petals all the same size and with no markings.

Other rare and interesting snow drops include Galanthus nivalis 'Grakes Gold' with yellow ovaries but perhaps not as clear as 'Elizabeth Harrison'. G.plicatus 'Diggory' with outer petals that form a bulb or globe, lovely, Galanthus plicatus 'Wendy's Gold' (another yell ovary type) and Galanthus 'Mrs McNamara' are al worth seeking.

Where to grow Galanthus

Grow them in the perennial border, a woodland situation, or even in a lawn. A shaded position is best. In pots, containers or troughs in flower they can make a great display, especially those rare and hard to find species.

Once Snowdrops stop flowering and have had some time to recover, in May usually, it is a great time to divide them, especially those over crowded clumps.

Start by lifting the clump with a sturdy garden fork, or turning out the pot if pot grown. Gently break apart the bulbs, replant in small groups of 4-5. Remember that all bulbs like a little food, so dig in some well rotted compost and manure when replanting.

If you find that when you dig the clump that the bulbs are a little limp you might be best to replant as a clump, give them a good feed and divide next season when they are stronger.

Galanthus Bulbs are available for sale from the following nurseries