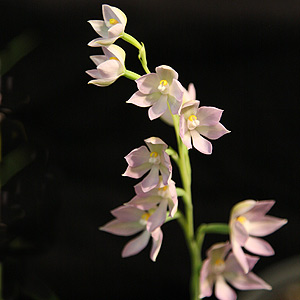 Thelymitra Orchids are terrestrial orchids from Australia and New Zealand where they are known as 'Sun Orchids'.

The interesting habit of the flowers only opening when they are in the sun and warmth make them fascinating.

With rather spectacular flowers, large and usually held high on tall stems, they can reach nearly 1m (3 ft) in height, although usually around half this in cultivataion.

Thelymitra species such as T.fragrans pictured right, are much sought after by collectors.'

These are a summer dormant orchid, the flowers appear in late winter after the plants have broken their dormancy in late summer. This is what makes them a little tricky in the UK. Our winters are colder than they are used to.

So Thelymitra are really an indoor plant. You can try simply moving the pots outside in summer as long as it is dry. Then in late summer a little rain will do what nature does.

However you will need to bring them back indoors before the cold of winter and the frosts set in.

They require sun, good drainage and not much fertilizer at all.

A dry summer dormancy is essential, they will come to life in autumn when you start to water them.

Thelymitra Orchids are available for sale from the following nurseries

Orchid Resources for the UK