Clivia plants and bulbs for the UK garden 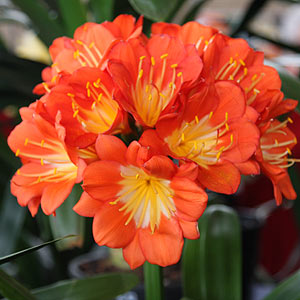 The well known Clivia miniata have been used as an indoor plant in the UK since the 1880s when the first clivia plants and seeds were sent from Africa. However many improved cultivars as well as other species are readiliy availoable for sale from specialist growers.

In the UK Cliva grow well in a conservatory and care and cultivation is relatively easy, however they do need to be protected from direct sunlight in order to prevent leaf scorch.

Clivia plants may also be grown indoors in a well lit room near a window. They require a well drained soil to perform best. We include clivia photographs and notes on many clivia species.

Clivia have been a very popular plant or bulb in the english garden and conservatory for nearly 200 of years.

And of course hybridisation has given us wonderf variets such as th Multipetal Clivia miniata bred by by A. Nakayama, pictured right.

Clivia or clivias make a great indoor or garden plant, they love shade and as they can tolerate dry conditions once they have become established, they can be regarded as a drought tolerant plant.

These plants do not like to be planted in heavy soil, many growers use an aerated potting mixture such as perlite or composted pine bark mulch. In the ground, again they need good drainage. Look out for for Clivia Robusta, a giant clivia.

Clivia Plants are available for sale from the following growers