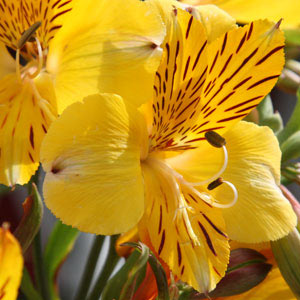 Long flowering plants are much sought after and alstroemeria are one such plant. With wonderful new cultivars becoming available the color range is fantastic, from pure white through to deep reds with yellow and orange along the way.

How good are these plants, widely grown as cut flowers alstroemeria grow well as in the garden as well as in containers. Sometimes called 'Peruvian Lily' or 'Lily of the Incas' they are available for sale as a rhizome or bulb when dormant or as potted plants, they may also be grown from seed.

New alstroemeria cultivars such as 'perfect blue' seem to have longer lasting flowers than some of the older plants and are readily available for sale online.

So why are these 'easy care', long flowering', 'colourful' plants that make great cut flowers not all the rage with gardeners ? Simply because they are so easy is one reason, secondly some gardeners have found that they tend to 'take over', they spread through the underground tubers, and some of the older types will self seed. This is more of an issue with species such as Alstroemeria pulchella than most of the flowing types available for sale.

Many of the new cultivars are lower growing to around 60cm. Others will reach 120cm with ease.

Look for the modern hybrids that do not self seed. 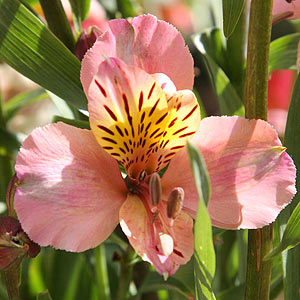 These are a drought tolerant plant that requires good drainage. They will survive without watering in most UK summers.

In very dry summers Alstroemeria can go dormant during summer.

After flower ing the long stems can be progressively cut right back to promote more flowers. As they die back in winter they can be pruned back to the ground.

Alstroemeria can be grown from seed planted in a cold frame. They will not grow from cuttings, however it is very easy to divide established clumps, simply dig them up in late winter, cut up the clump of roots and tubers, divide and replant. You will need to give them some water, with a little added liquid seaweed or vermicast tea.

Alstroemeria bulbs for sale online and by mail order