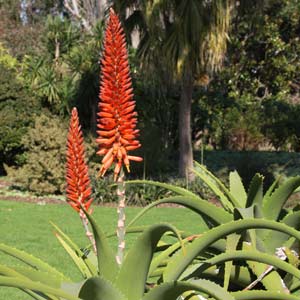 Coming in a range of types or species with many both small and large varieties available for sale in the UK, Aloe Vera is probably the best known of all, however the aloe genus is a large one with over 400 different members that are popular both as garden plants and as specimens in pots.

As sun lovers aloes thrive in a sunny warm spot and as they originated in areas around Africa and Madagascar the need for warmth is self explanatory. In the UK they do well in a conservatory or a sunny corner.

With species, from low growing varieties to tree like specimens the most well know aloe is aloe vera or the 'medicine plant' which is valued for the properties of the jelly like substance from its leaves. 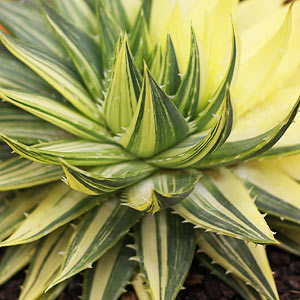 Aloe like most succulents, are sun loving, and are generally regarded as being drought tolerant. They require excellent drainage, so consider growing in pots or containers, try using a succulent potting mix, or add some perlite, scoria or other material to improve drainage.

If growing in the garden maybe mound up some soil to create improved drainage in a a raised garden bed. Like yuccas and agaves, aloe require very little maintenance.

Only water during aloes the growing season, and not on very hot days. Let them dry out between watering.

Aloes are suitable for growing in containers or pots, especially the smaller species pictured below. From left to right we have Aloe 'Quicksilver, Aloe mitriformis variegata and Aloe broomeii

How much should you expect to pay?

Many small specimens are available for around £3-4.

Aloe Plants are available for sale from the following participating growers