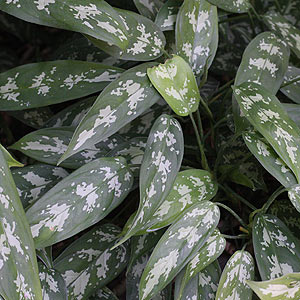 Alocasia wentii, is from New Guinea and Alocasia longiloba thibautiana, pictured right is another species with good foliage. With over 70 species of Alocasia the variety in form, colour and size is extensive.

Alocasia are grown for the fantastic foliage, although they do flower as well. Alocasia amazonica is one of the most commonly grown of the species with cultivars such as Alocasia Amozonia 'Polly' or African Mask plant having large dark foliage with white veins.

Although Alocasia are usually grown in the pots in the UK they can be grown in the ground if you dig them in Autumn, divide the plant, and over winter indoors or in a Conservatory.

Species such as Alocasia macrorrhiza will grow to 2m + with individual leaves 1m long.